Apr 17 Posted by Jason Saffon in EMS In the News 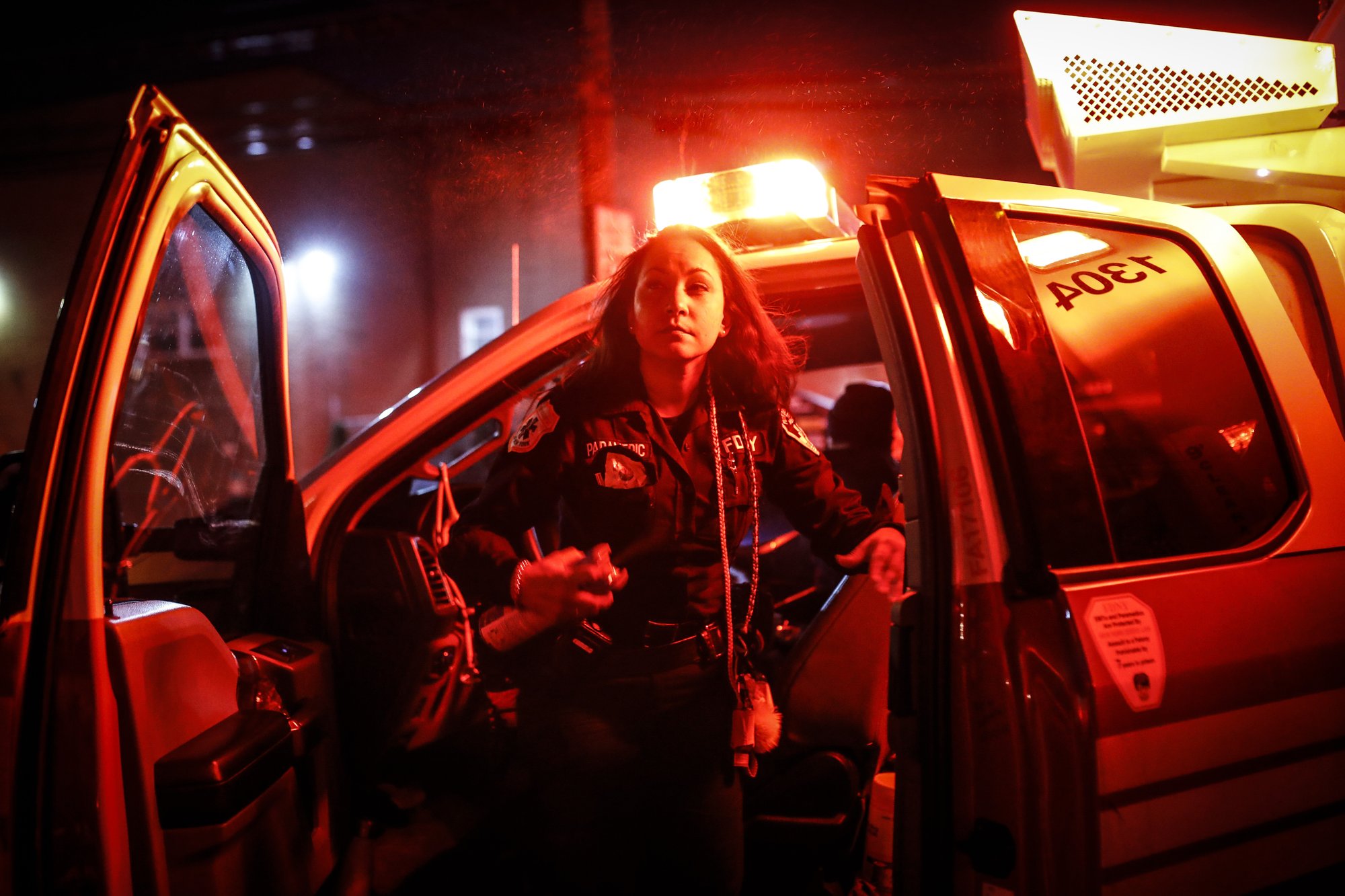 NEW YORK (AP) — Elizabeth Bonilla pulls her ambulance up to a set of Bronx row houses. Another ambulance and a fire truck are already there, their flashing lights painting the dark streets an eerie shade of orange. Neighbors gather on their stoops to watch. Some sip wine.  "We gotta gown up," she says as she climbed out of the vehicle. This call is a suspected COVID-19 case, which means she needs gloves, masks and a full-body plastic smock.    An empty gurney waits by the front steps while four EMS workers, Bonilla included, rush upstairs.

About 45 minutes later, three medics emerge. Bonilla, a 43-year-old Fire Department paramedic, follows five minutes after that. She walks slowly, an oxygen tank in the bag on her back.  "This one is hard," she says. "Real hard."  The coronavirus pandemic has killed at least 8,900 people in New York City, plus as many as 3,900 more whose deaths were never confirmed by a lab test.  At its peak, emergency calls nearly doubled from their usual average.

Call volume has dropped in recent days in a sign that the crisis could be easing.   Still, the FDNY's 4,000 emergency medical workers are straining to keep up.  "I don't think that anyone was prepared for this," Bonilla says.  To get a sense of the challenges paramedics like Bonilla face, The Associated Press followed her through the first half of her 16-hour double shift Wednesday. 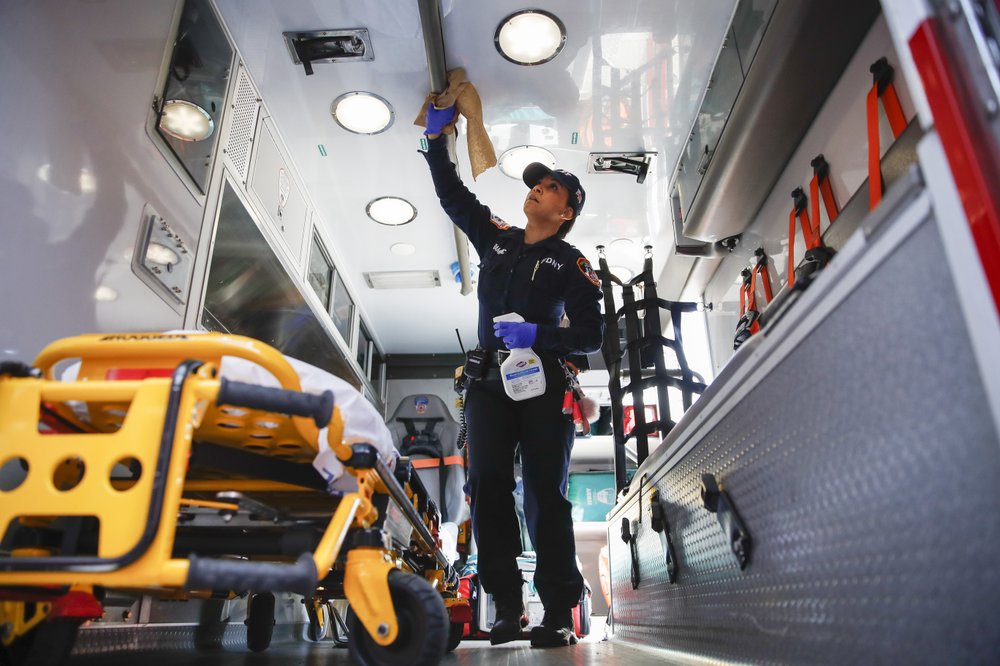 Bonilla arrives early for her 3 p.m. start time, but the crew using her ambulance is running late. A call at the end of their shift has kept them out longer than scheduled — a standard occurrence in recent weeks.When the vehicle finally arrives,  Bonilla pulls it around to the front of FDNY EMS Station 3, in the South Bronx's Castle Hill neighborhood.  She loads her personal supplies in through the driver's side door. She stashes a clear plastic bag filled with sanitizing supplies and hangs up her pink stethoscope.

Her thermos, holding a home-brewed ginger-lemon tea, gets dropped into a cup holder. It — along with regular prayer — helps keep her calm.  She pulls wipes from the plastic bag and begins to disinfect. She rubs down her seat, the steering wheel and the rest of the drivers' station, and then moves to the passenger side. She finishes by sterilizing the treatment area in back.  Bonilla's neon-pink tools make her easy to spot — pink scissors, pink keys, pink tape on her walkie-talkie and hand sanitizer. 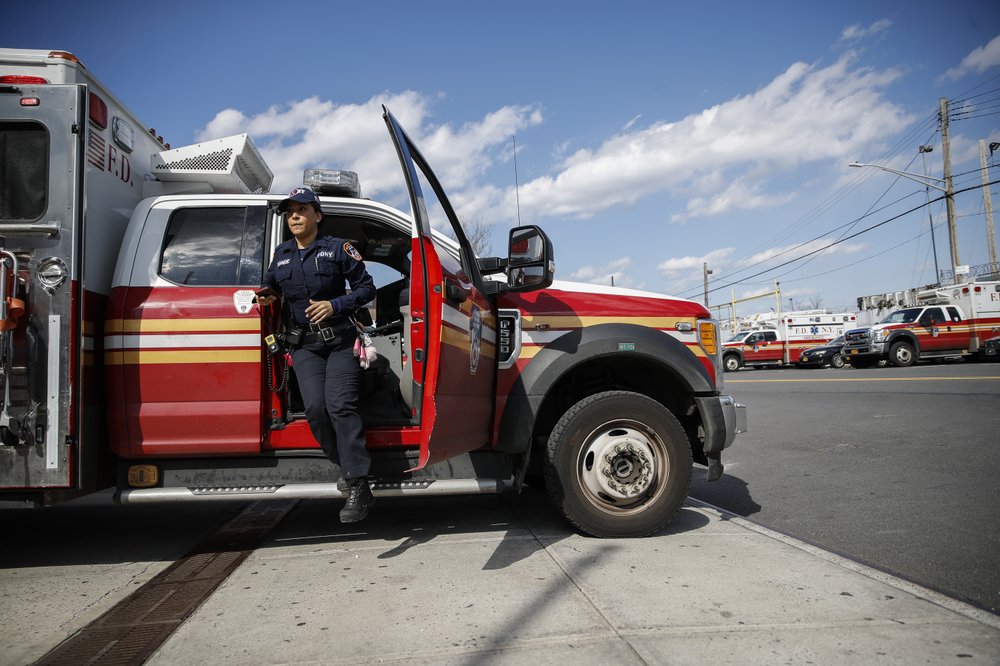 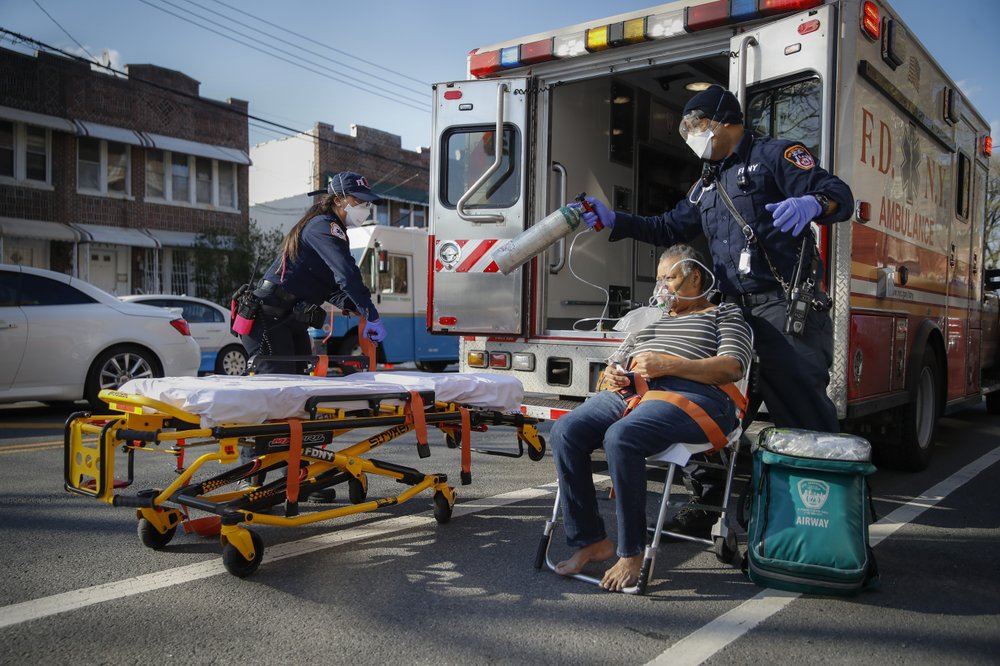 FDNY paramedics Elizabeth Bonilla, left, and Keith Kahara, right, prepare to load a patient on oxygen into their ambulance on an emergency call, April 15, 2020, in the Bronx borough of New York. (AP Photo/John Minchillo)

he also has three bright braids each dedicated to a cancer-stricken family member. A green and orange one for her mother, who has leukemia and skin cancer; a blue one for her father, who has prostate cancer; and a pink one for her aunt with breast cancer.  "Hair is life," she says. "And when you're a cancer patient you lose your hair, and for a mental thing, it kind of makes me feel like I have them with me."  She hasn't seen her mother or father in two months; she can't because of her exposure to the virus and their high-risk status.

She's been trying to help manage their lives remotely with her sparse downtime.  "I'm a single parent," says the mother of sons ages 22 and 16. "I'm handling things at home, and I'm being a parent to my parents, and then I'm coming into work and I'm taking care of people, and then I do it all over again every day. I think taking care of others is my calling. It has to be."

Nearly two hours into their shift, Bonilla and her partner have yet to be pinged by dispatchers — an unthinkable lull as recently as a week ago.They had been making between five and seven calls each shift and often working two shifts per day, doing their best to aid patients even as they ran low on N95 face masks and oxygen tanks.

Social distancing measures have slowed the virus's spread, and that has eased the demand for paramedics' services. Bonilla is certain the calm will be short-lived, fearing another surge in COVID-19 cases when New Yorkers begin returning to work.  "It's the eye of the storm," she says.The first call finally comes around 4:50, and five minutes later, Bonilla parks the ambulance in front of an apartment building. She jumps out of the truck, puts on gloves and a mask, grabs the necessary equipment, and rushes in.

Minutes later, she emerges wheeling a patient who is alert but hooked up to a breathing aid.  They pull into a nearby emergency room 30 minutes later and pass off the patient to doctors and nurses waiting in full protective gear — gloves, face shields and floor-length gowns. Bonilla brings the empty gurney back to the ambulance, sprays it with disinfectant and loads back up. 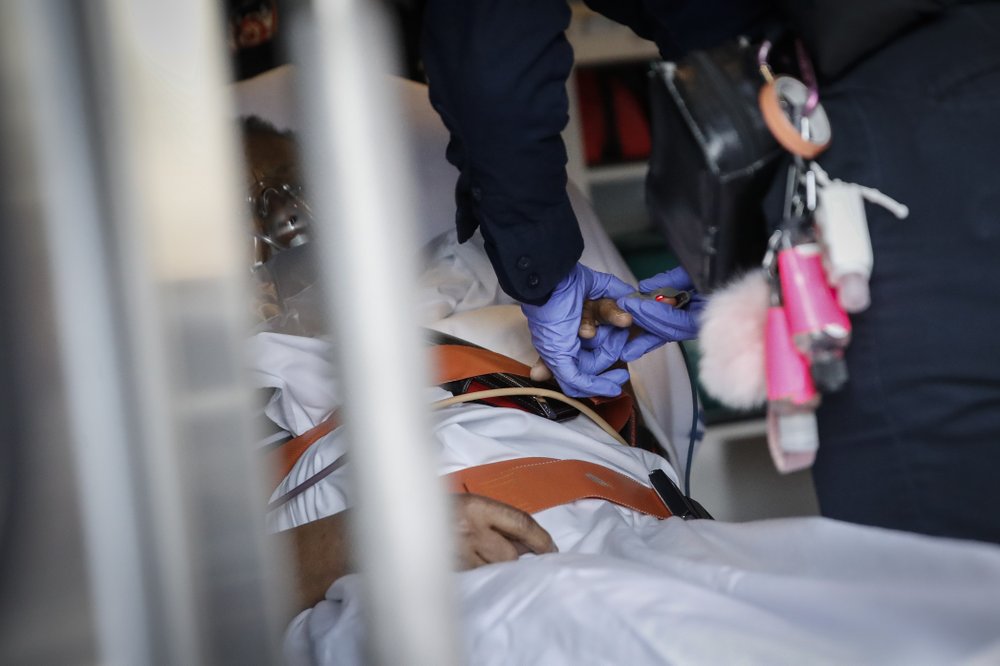 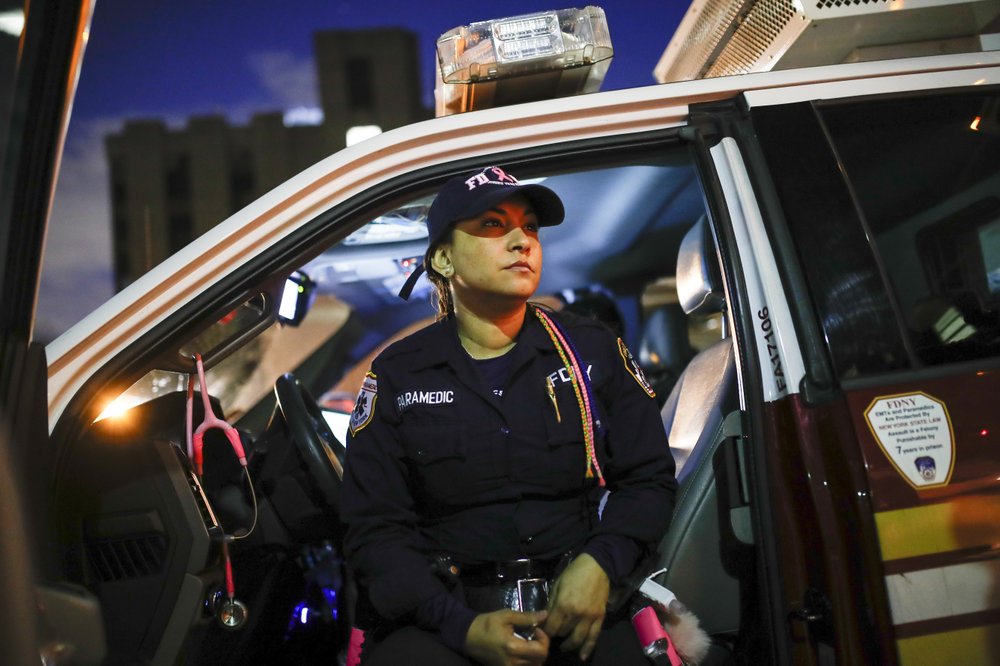 FDNY paramedic Elizabeth Bonilla wears her multicolored braids as she sits in her ambulance between calls after delivering a patient to Jacobi Medical Center, Wednesday, April 15, 2020, in the Bronx borough of New York. (AP Photo/John Minchillo)

A backlog of ambulances builds in the ER bay while Bonilla's unit finishes paperwork, and when they get their next call, they realize they have been completely blocked in. Dispatchers eventually give the call to another EMS team.  A few minutes later they're back on the road, rushing to a different scene.

They arrive at a house and find a family in disarray. A shouting match breaks out on the front porch, a disagreement between family members over whether the patient should risk virus exposure by going to the hospital.  Bonilla calls for police assistance, and two officers cordon off an angry middle-aged man while Bonilla evaluates his stepson in the ambulance.

Twenty minutes later, Bonilla's vehicle takes off with the patient still in the back. The stepfather alternates between crying and shouting as they pull away. 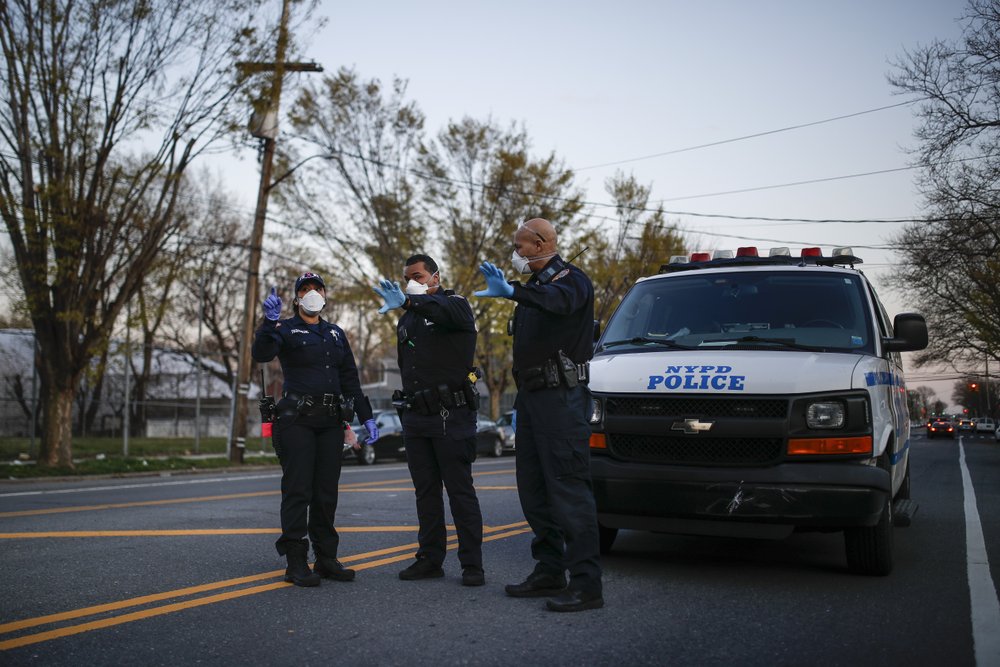 FDNY paramedic Elizabeth Bonilla, left, speaks with two NYPD officers due to a dispute on an emergency call, Wednesday, April 15, 2020, in the Bronx borough of New York. Twenty minutes later, Bonilla's vehicle pulls away with the patient in their ambulance. (AP Photo/John Minchillo)

After delivering the patient to the hospital, Bonilla and her partner return to the station for a snack. She rushes out of the building moments later, a box of doughnuts and a half-finished coffee in hand, and says they've received an urgent call that took her a short distance to the row house, just down the street from the Whitestone Bridge, which connects the Bronx and Queens.  Bonilla loaded the oxygen tank and an empty gurney back onto her ambulance.

She walks around the rig, out of sight of the neighbors. She pulls down her face mask, reaches for a paper towel and wipes tears from her eyes.  "You can't do nothing," she says.  Slowly, she removes her gown, gloves and mask. She walks back around to the driver's door, grabs a Lysol bottle in her plastic bag and douses herself head to toe.  A family member emerges from the house, a young man about the same age as Bonilla's oldest. He sits on the stoop, hands on his face, and sobs.  Bonilla takes a sip from her thermos and keeps her gaze straight ahead. 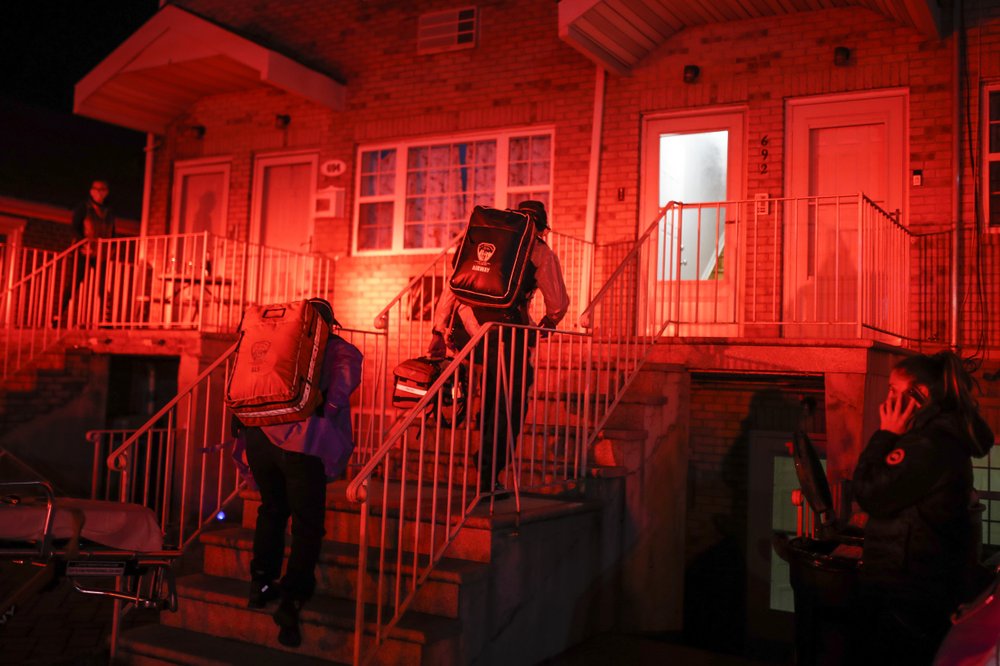 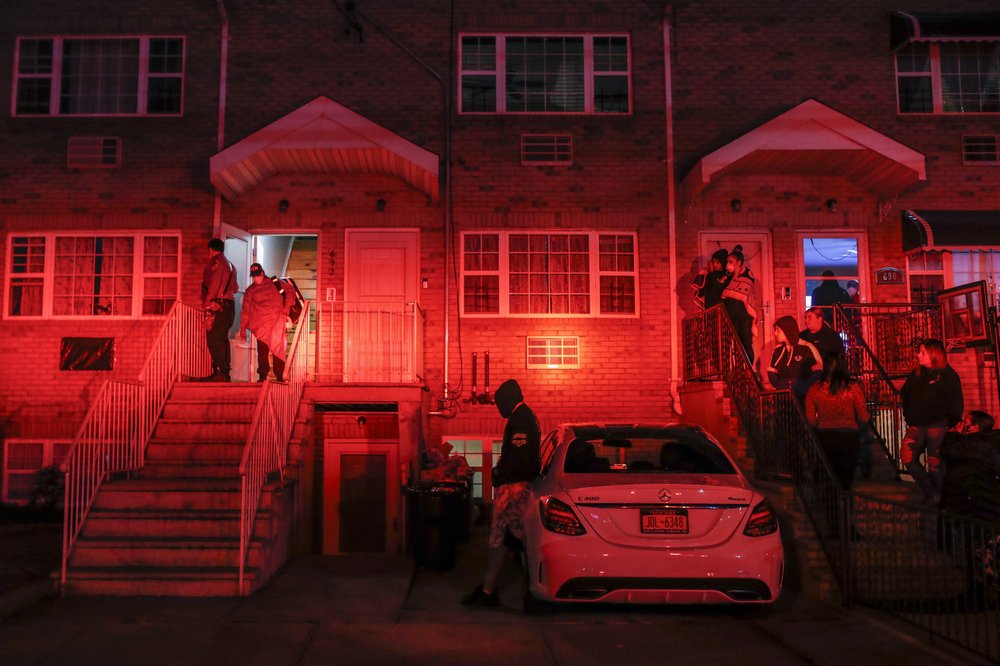 FDNY paramedic Elizabeth Bonilla, second from left, is watched by neighbors as she emerges from an apartment on an emergency call, Wednesday, April 15, 2020, in the Bronx borough of New York. (AP Photo/John Minchillo)

Bonilla has been sleeping with the lights on and playing gospel music through the night. Anything to shake the replays from her head from calls like the last one.  "You hear the cries," she says. "You just hear and you see everything all over again."  She's back at the station now, getting a brief break. She's set to punch back in at 11 and start another eight-hour run, covering an overnight shift for a co-worker who needed the night off to rest and tend to family.  "I'm just drained right now," she says. "I'm emotionally drained and physically drained and definitely mentally drained."

She changes the subject to prayer, explains how her faith keeps her going. Her family, too.  And then there are the pandemic victims, new ones every day, that she knows are relying on her expertise and support. "The moment we walk through the door, the families, it's almost like they've seen God," Bonilla says. "They are looking for help immediately. They have this sense of relief, and then they go ahead and pass all responsibility on you.  "You want to make sure you're strong for them." 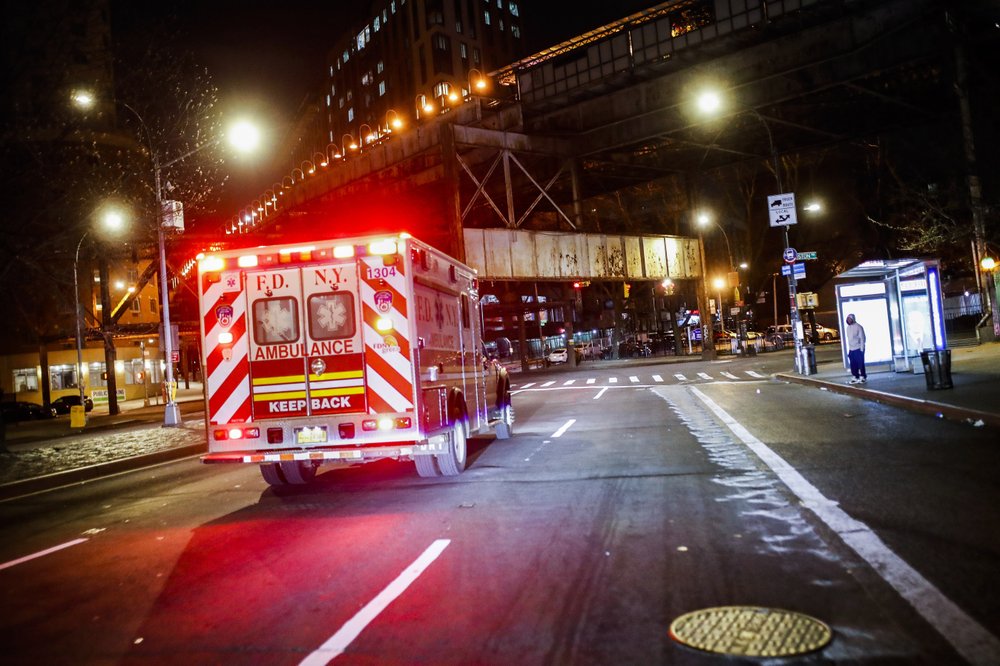 FDNY paramedic Elizabeth Bonilla drives to an emergency call along an empty street on her second consecutive shift, Wednesday, April 15, 2020, in the Bronx borough of New York. (AP Photo/John Minchillo)

To help support the brave men and women of the FDNY Emergency Medical Service, as the fight to save lives during the COVID 19 pandemic, click the link below: