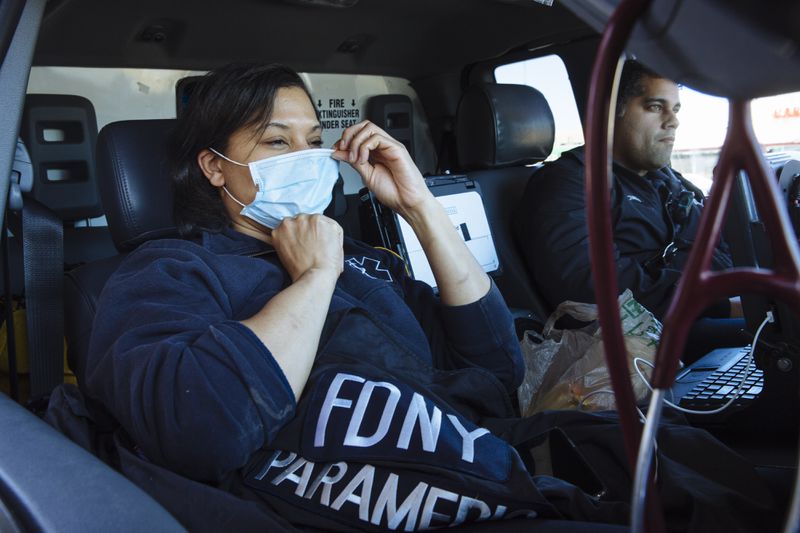 COVID-19 war-weary paramedics Kim Benson and Chris Feliciano lived through hell. Now the EMS instructors wonder if it was all just a "rough drill" for the worst yet to come. "Not really scared, just apprehensive," Benson told the Daily News about a possible rebound. "Is it going to happen? I have a feeling it will. It's kind of like a flu illness, so I wonder if around flu season in the fall it might happen. "Time will tell," she added. "We're just going to have to do the same exact things that we've done to get through ... And to cope, all over again." Feliciano said he's just concerned the already battered EMS ranks will be further drained by the crush of another outbreak. "What I'm afraid of is that more essential workers are going to get sick. That depletes us," he said. "I just hope there's a better contingency plan." By the time the two instructors were finally tapped to join the frontlines of what would be the toughest fight of their careers, they'd known it was coming. "Inevitable," said Feliciano. "They weren't going to have us sitting around." Looking back isn't easy, but looking ahead is worrisome.

As the sun rose over the brick buildings of the Fort Totten EMS training center in Queens on a recent morning, the pair turned out with 10 colleagues for roll call on the 6 a.m.-2 p.m. shift as the pandemic's confirmed city death toll climbed above 14,000. They, along with the rest of the academy instructors, were summoned back to the streets by March 23. The two veterans, despite a combined 35 years on the job, recalled how staggered they were by the enormity of the crisis, by the carnage of a single eight-hour tour and the exhaustion of the double shifts covered by many EMS workers. "Worse than 9/11," recalled Feliciano, who was starting his own 16-hour tour. "9/11 was just one day. This was daily mayhem, chaos for so many days. People were working 80 hours a week. It was just non-stop, no down time." 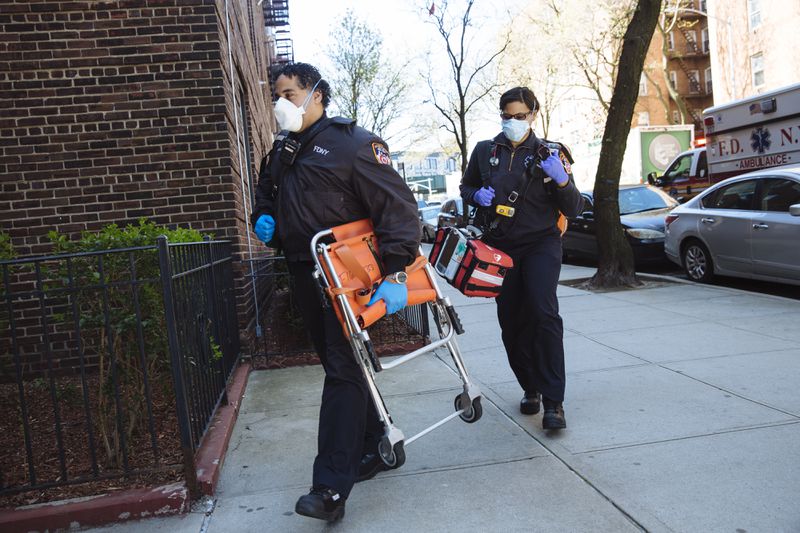 FDNY Paramedics Chris Feliciano and Kim Benson carry equipment on a call to the home of a COVID-19 patient in Queens.(Angus Mordant/for New York Daily News)

The pair — like their harried colleagues across the boroughs — went scrambling from address to address, dealing with dead bodies and heartbroken relatives, searching for answers in a world where words simply fail. During the virus' peak in late March and early April, the EMS crews were routinely answering over 6,000 calls a day, a record-setting number that's since dropped by roughly 50%. "Like a war zone," said Benson, recalling one hospital stop. "As soon as you walked in, you heard every alarm on every single monitor, just constantly beeping. There were patients everywhere. I couldn't really tell if everyone was attached to a ventilator, but I remember hearing the beep of the alarms. "Everyone was busy and there was someone everywhere. You couldn't really walk." Feliciano, 38, joined the city Emergency Medical Service in 2002, earning a promotion from EMT to paramedic before moving to the academy four years ago. Benson, 41, is a 17-year veteran who became a paramedic and then an instructor after working in her native Queens and the Bronx. 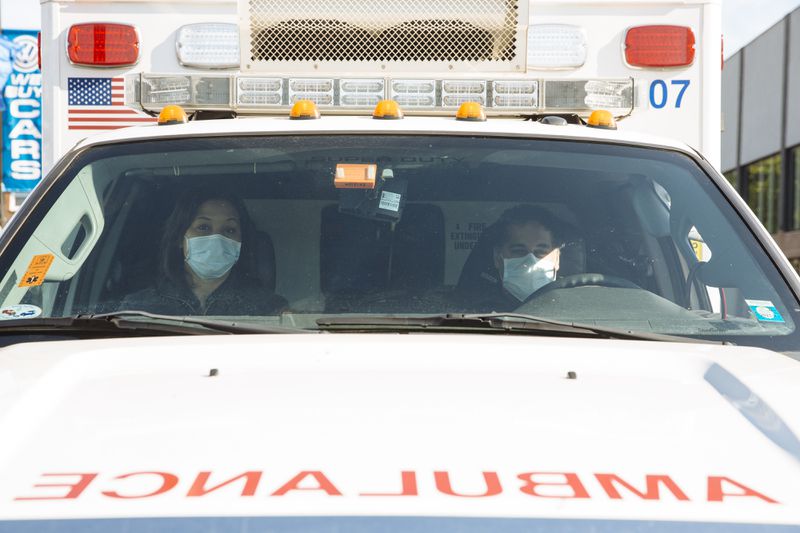 On this morning, before heading out for their shift, they received what currently passes for good news from roll call Lt. John McGuire: "No new buck slips. Thank God." A buck slip is an order from FDNY brass advising changes in protocol. In this case, there were no hospitals on diversion — which bars the paramedics from bringing patients to hospitals already overrun with the sick, making things more complicated in an already chaotic life and death struggle. Feliciano and Benson climbed into their city ambulance and headed out from the Queens facility to start their day. It's now so different than their first days, Feliciano recalled, when paramedics were still adjusting on the fly to a tsunami of frantic calls. One heart attack in a week was usual for a crew in a quiet neighborhood prior to the pandemic; he answered two in a single shift. He recalled people dying as helpless and horrified family members watched.

The grim encounters were impossible to shake.

"Constantly telling people their family member expired, over and over — sometimes in the presence of children, it takes a toll on you," he said. "It gives you some kind of, I want to say PTSD, because the flashback is so vivid." He recites the explosive numbers generated by coronavirus: 800 deaths in a single day on April 8, compared to roughly 160 over the typical 24 hours in pre-pandemic days. The current figure is about 350 per day, still more than double the norm. Benson recalled a lingering sense of unease in the air as they drove from call to unending call. "You kind of got a sense of mass hysteria," she recalled. "I was just imagining people at home, trying anything, just desperate to stay healthy."

Feliciano, a father of two college-age kids, was tested for coronavirus after experiencing mild symptoms prior to getting back on the streets, and has yet to learn the results. Single mom Benson self-quarantined from her 14-year-old son Jaden, moving him in with her mother for the duration of the battle. Even as things have slowed down — the pair answered a single call during their shift, from a nervous and scared man recovering from the virus — the two paramedics can't help wonder about the odds of a second COVID-19 wave.

"I don't want to see a resurgence, that's probably the last thing I want to see," Benson said. "I wonder what the new normal is going to be."