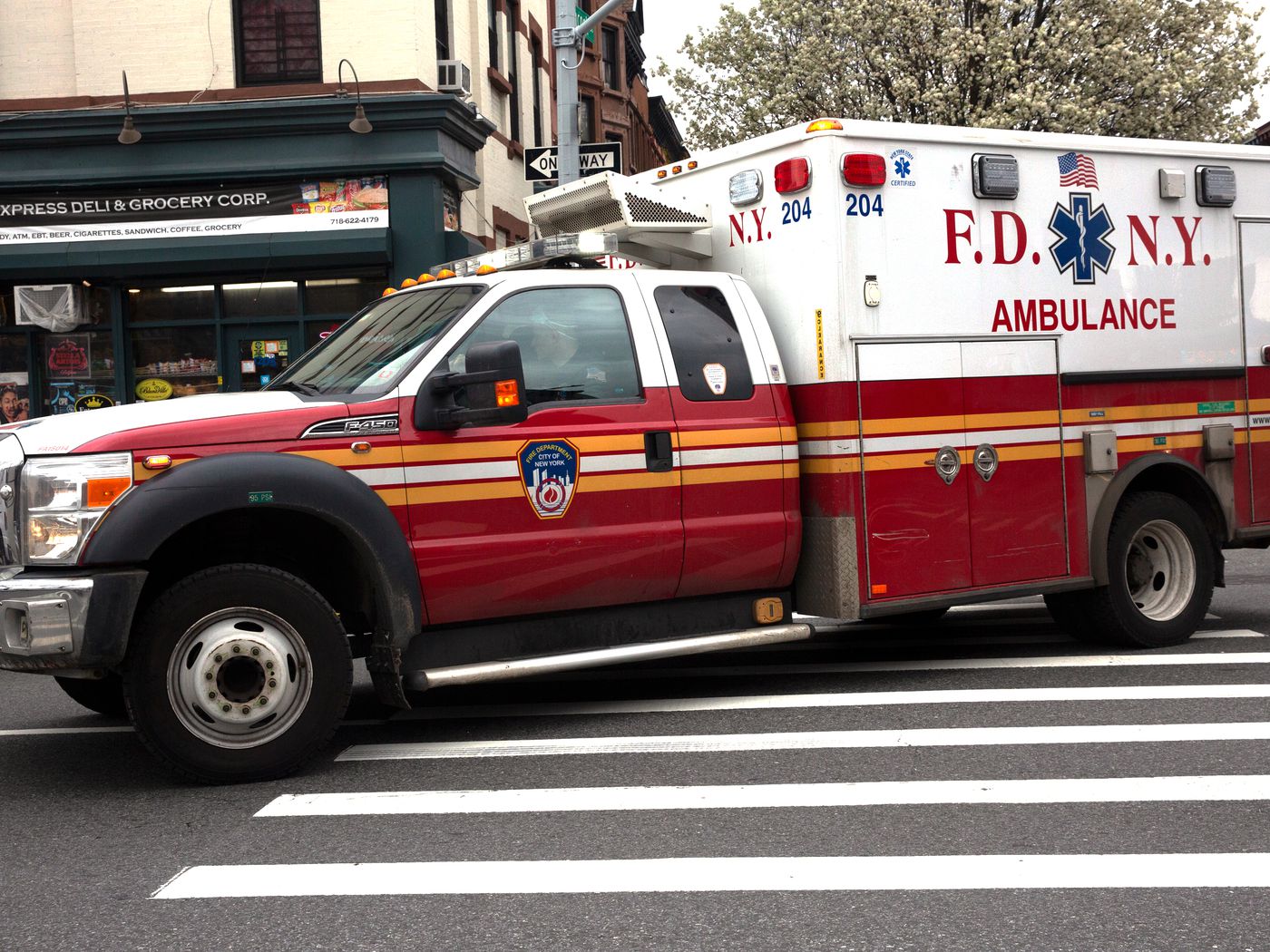 Paramedic Steve Kleinberg plans to retire next month after 15 years on the job, even though he hasn't accrued enough time to reach full pension benefits.

"I want to leave in one piece, with my health intact," said Kleinberg, 56, who works out of FDNY EMS Station 39 in East New York, Brooklyn. "The second [COVID] wave that I believe is coming definitely hastened my decision," he added. "The insane call volume, the hours, having to be hypervigilant all the time to protect my wife — it was a lot. I personally never felt overwhelmed, but it was a lot. At the peak of the virus in the city, it was like a tsunami." Kleinberg's side job — as a funeral director — has been lucrative enough in the pandemic era to enable him to make a career transition. "But a lot of my contemporaries don't have that choice," he said. "They're too young and, financially, they can't leave."

Instead, many of Kleinberg's 4,300 or so colleagues are facing fears of another round of COVID while still grappling with the trauma from the peak of the first outbreak. Paramedics and EMTs say they're enduring unprecedented levels of stress, anxiety and exhaustion sparked by the storm of COVID-19, racial justice protests and ongoing salary and benefit issues. Union officials and family members say the relentless caseload and harrowing medical scenarios created by the pandemic may have contributed to the suicides of three EMS responders in a three-month period — and they're worried the virus isn't done wreaking havoc. 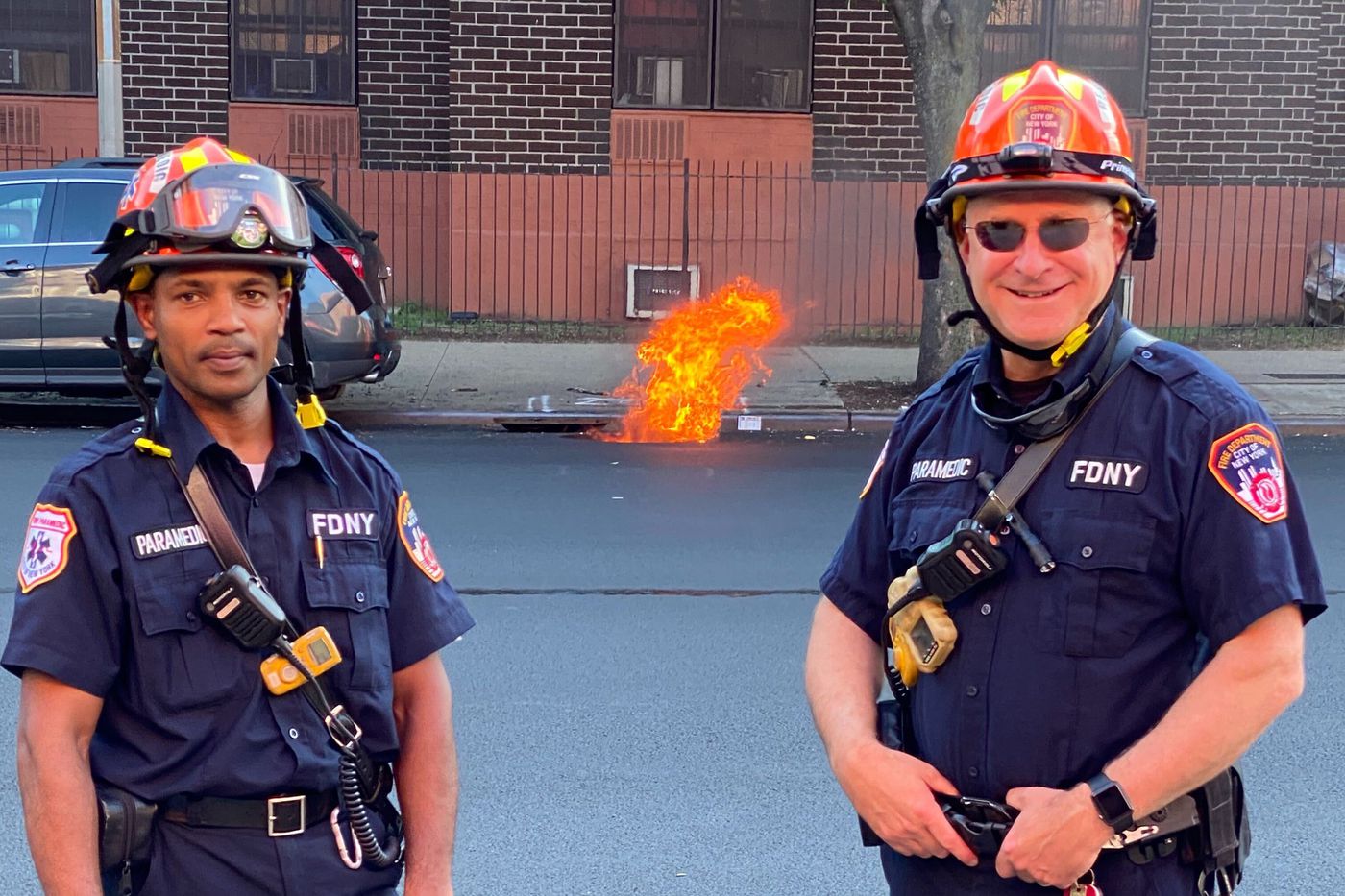 FDNY EMS paramedics Kenneth Silas, left, and Steve Kleinberg, who said he is retiring in August to avoid facing a second wave of the coronavirus. Photo Courtesy of Steve Kleinberg

​"As of last month, we had less than 150 people with more than 20 years on the job, and dozens have retired since then," said Oren Barzilay, the president of the FDNY EMS Local 2507, the union representing the department's emergency medical service workers. "Every day people are telling us they're leaving. It's a severe crisis."

The FDNY already has more than doubled the number of EMS peer counselors, from 20 before the outbreak to a current level of 45, according to department spokesperson Jim Long. An additional 50 counselors will be trained and deployed in August, he added, nearly quintupling the pre-pandemic staffing. But the stigma of asking for help, particularly among those used to offering it, remains an obstacle, union and FDNY officials concede. Paramedics and EMTs fear the department will medically restrict them from field duty if they seek mental health services, Barzilay said. The FDNY insists that restricting workers for mental health reasons happens only in limited, medically necessary circumstances in which the health and safety of the first responder or the community is at risk.

"There may be instances where someone is removed from frontline work, but there are plenty of members who continue to work in their stations while receiving counseling," Long said. "If they are pulled offline, it's for their benefit." Long pointed to increased calls to the department's anonymous Counseling Services Unit hotline as a positive development. Between March 23 and June 30 of this year, the number of calls to the hotline jumped 36% from the same period last year, from 325 to 442, Long said. The number of requested counseling outreach sessions for the same period also spiked 36%, from 3,293 to 4,488, he said. Asked to explain the increases, Long replied, "Maybe it's our outreach efforts, but it's not really the time to question, it's the time to support." The surge in counseling requests, he added, "is a good thing for us and, more importantly, a good thing for the field members."

Long also noted that a class of 180 or so EMTs who left the academy early in March to deal with the crush of COVID-19 cases received counseling in breakout groups once they returned to complete training in June and July. "We're working with the union to let the members know that we're in this together," Long said. "This is something that the department is taking seriously."

Barzilay called the FDNY's efforts "a start, but far from what we need." The union is working to secure additional professional mental health services for members, he said. "Some are drinking heavily and some are not even able to complete a tour because of anxiety attacks," he said. "We're seeing the signs of PTSD and we need real psychiatrists and psychologists."

In a Tuesday letter to union members, Barzilay noted a partnership with a company called Reloveution to provide up to six free therapy sessions with licensed mental health professionals. Individual and group therapy would also be available at $150 an hour. He also mentioned a possible "buddy system" to help members cope with events that "have pushed many of us to our limits both physically and psychologically." Meanwhile, the additional burdens of dealing with protests stemming from systemic racial injustice may also have had an outsize impact on FDNY EMS responders, roughly 55% of whom are Black, Hispanic or Asian, and 30% of whom are female. In contrast, about 78 percentage of FDNY firefighters and officers are white, and less than 1 percent are women, according to Vincent Variale, president of the Uniformed EMS Officers Union Local 3621. 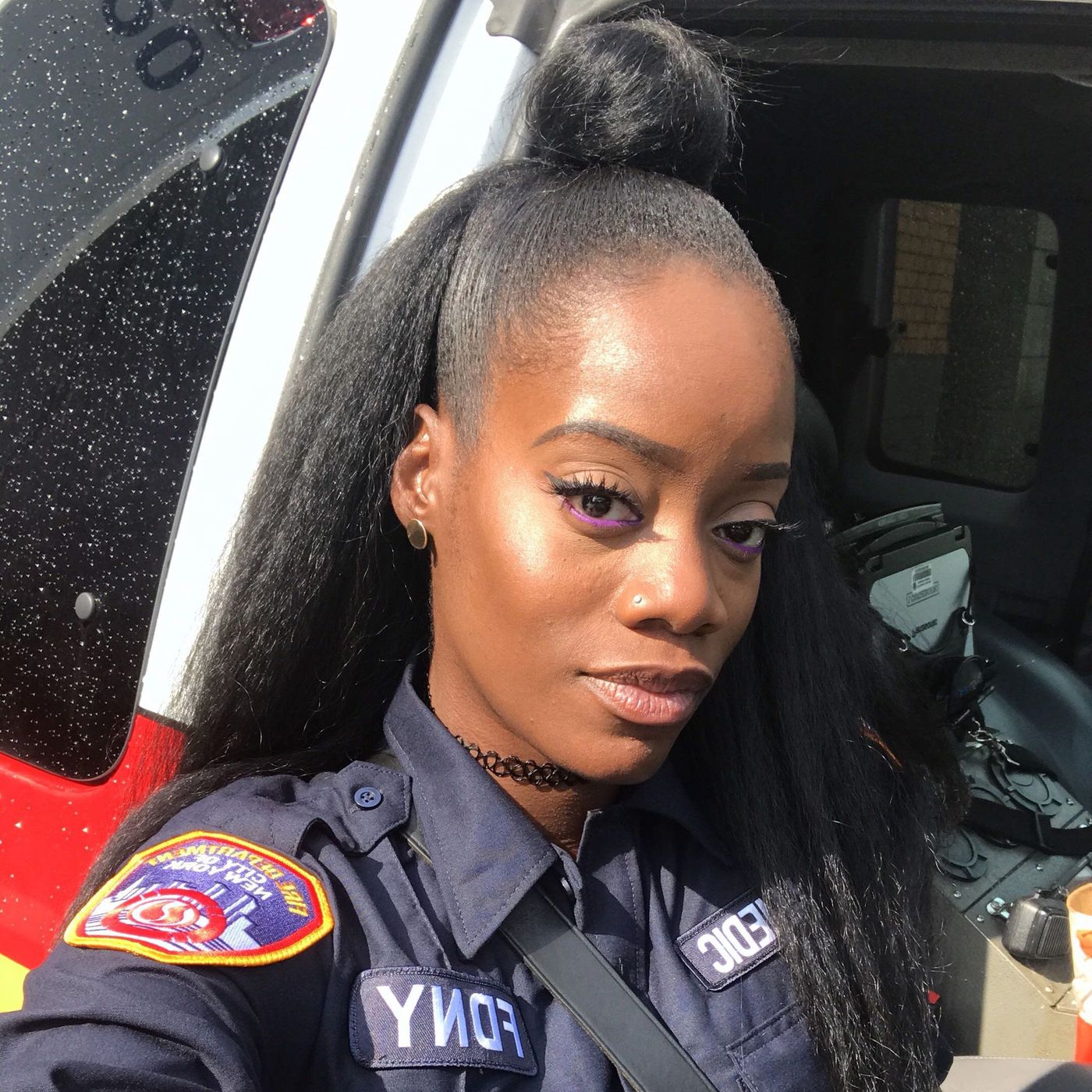 ​"Anyone who is a Black first responder has been through the ringer this year," said paramedic Sherry Singleton, 33, noting the difficulty of navigating "an ongoing pandemic that disproportionately kills Black people alongside a modern-day civil rights movement fighting against institutionalized racism." Singleton first spoke to THE CITY in March about the "mix of paranoia and anxiety" she felt working in the trenches, and later when she landed in the hospital with COVID-19 symptoms.

"Coronavirus has completely eclipsed 2020," she wrote in a text Tuesday between overnight shifts. "Whatever any of us think we know, we don't. Whatever plans we implement may implode on itself at a moment's notice. We've all watched that happen again and again due to coronavirus." An FDNY EMS first responder from Queens, who asked her name not be used for fear of being sidelined by the FDNY, agreed with the need for additional support services.

Ambulance EMT just got on her radio to cheer on the Black Lives Matter protest in downtown Brooklyn. People flipping out pic.twitter.com/Yalwh8hn37

​"Honestly, there have been times when I've questioned whether this is the right career for me," she said. As a Black woman, she added, she was particularly distressed by the one-two punch of the coronavirus outbreak followed by anti-police brutality protests in the wake of George Floyd's death. "I've never cried so much in my life," she said. "I come into work crying, and I leave crying."

Additional mental health support came too late for some. Three EMS first responders have died by suicide since April. On April 24, recently graduated EMT John Mondello, 23, was found dead off Shore Boulevard in Astoria. He took his own life with a gun that belonged to his father, a retired NYPD cop, officials confirmed. On July 15, EMT Brandon Dorsa, 36, assigned to EMS Dispatch Operations, also killed himself after serving the department for nearly six years, the FDNY said. Just a few weeks earlier in June, nine-year veteran Lt. Matthew Keene, 38, died from a self-inflicted gunshot wound to the head in his Nyack home, authorities said. His mother, Susan Keene, suspects an undiagnosed case of COVID-19 may have triggered her son's desperate act.

"He didn't have the antibodies, but those tests are inaccurate half the time," said Keene, a former nurse. "I'd be very surprised if he didn't have the virus. My husband read something somewhere and we wondered, 'Could he have had some sort of COVID psychosis?'" The journal Schizophrenia Research recently reported cases of psychosis in people infected with any virus ranged between 0.9 and 4%. "I need to know what happened, because something definitely happened that flipped a switch and made him lose who he was," Keene said. "We were just absolutely shocked when it happened. We're still shocked." Even if Matthew Keene did not have COVID-19, his mother suggested that the environment created by the pandemic exacerbated the stress of an already nerve-racking job. He was working 12-hour overnight shifts, lived alone, and had no pets. Fears of spreading contagion prevented him from socializing much or partaking in favorite pastimes like hiking or scuba diving, Susan Keene said.

The cause of a suicide evades easy answers, experts say, but Keene's mother said, "I do think the pay discrepancy between EMS and other first responders adds to the stress. EMTs and paramedics are the ones who really dealt with this crisis." In New York City, the current starting salary for EMS is $35,254 — $16.82 per hour — about $10,000 less than the $45,196 starting salary of a city firefighter. After five years, firefighters make around $86,000 compared to around $50,000 for EMTs and $65,226 for paramedics, who are trained to perform more advanced procedures. NYPD officers start at $42,500 and hit $82,000 after five years. 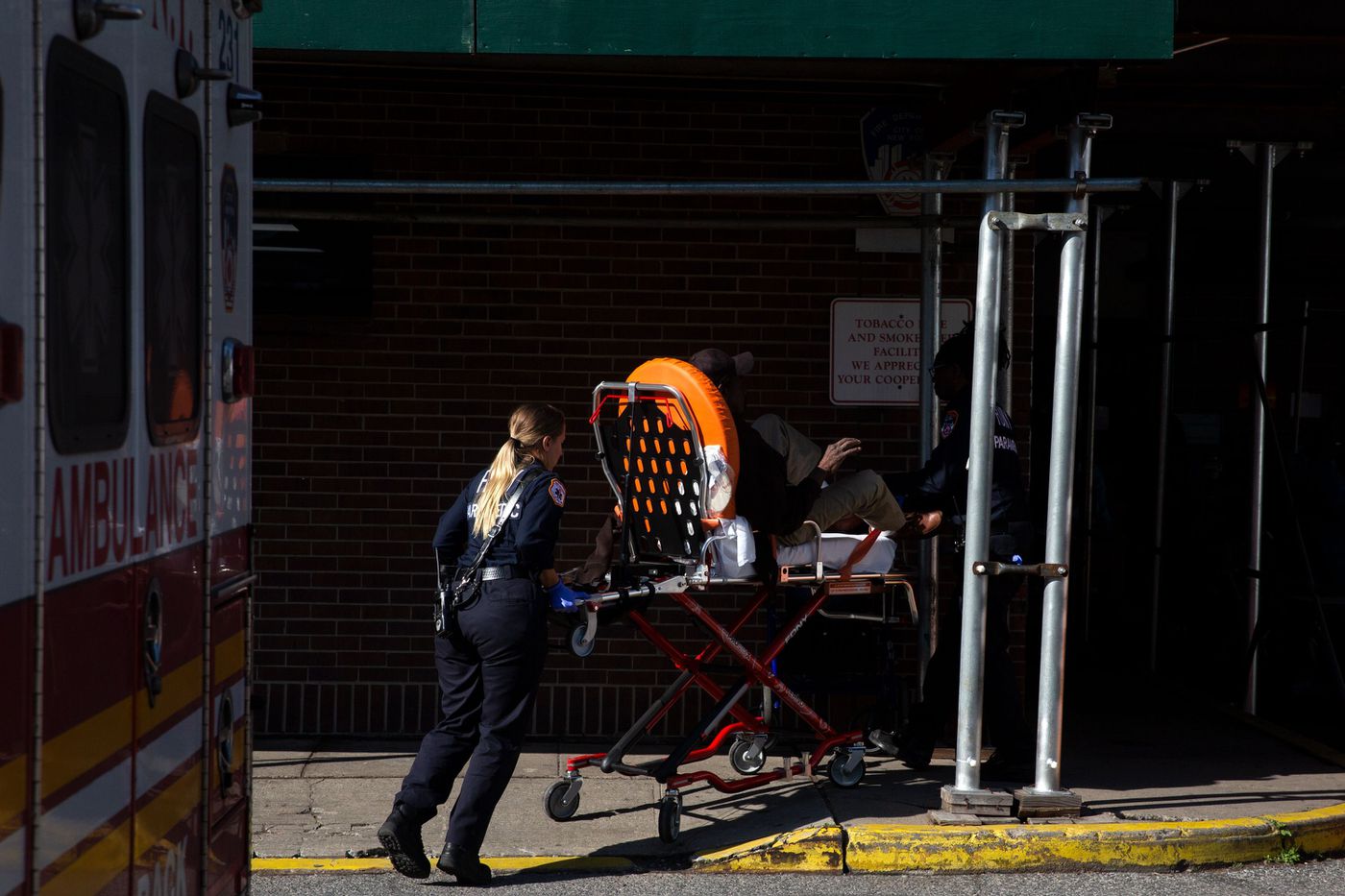 "The commissioner has gone on the record saying EMS members are deserving of a pay-grade increase," Long said, referring to FDNY Commissioner Daniel Nigro. "We support their efforts."

Keene noted that advocating for EMS workers "is something we'd like to push for. We're just not ready yet. "You know, my son's coworkers have been so wonderful about reaching out to us to show their support," she said, noting that not one burdened her family with complaints of job stress. "But I really think they need help."