On the coronavirus front line: The life of a NYC paramedic

Thousands of NYC first responders are the first line of defence against COVID-19. Anthony Almojera is one of them. 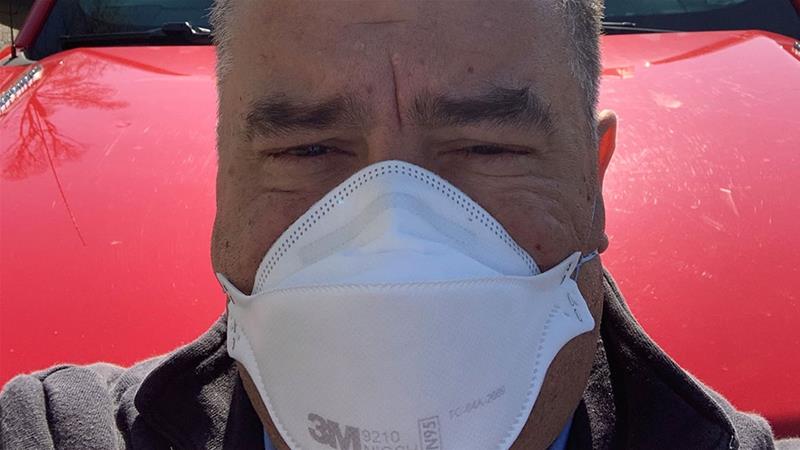 Before the coronavirus pandemic, life in New York City unfolded amid a cacophony of noise - or as local paramedic Anthony Almojera puts it, the city ran with a constant "din of everyday life" in the background.  "It is so quiet now," said Almojera, who was born and raised in Brooklyn, and works in the borough today. "The siren, the ambulance siren, is all you hear - and that is now our version of listening to an angry ocean. It's just out there, and you cannot help but hear it."

But that number began to climb steadily in mid-March as a result of the coronavirus crisis, which has overwhelmed the city's healthcare system and stretched hospitals, funeral homes, morgues, and other service providers to their limits. There were more than 134,000 confirmed cases and at least 9,700 deaths in New York City as of Sunday.

On March 30, New York City EMS officers responded to 7,253 emergency calls - a new single-day record, said Almojera. By comparison, New Yorkers made about 6,400 calls on the day of the September 11, 2001 attacks.

"We're having 9/11 call volume-plus every day, with patients," he said. "We have been at breakneck speed running around the city." 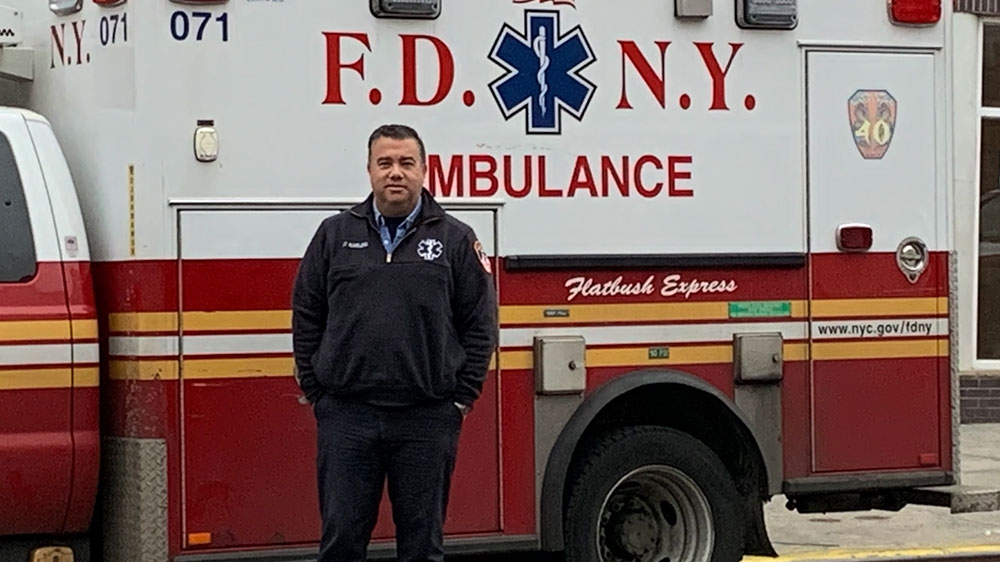 ​Thousands of New York City emergency medical technicians (EMTs) and paramedics are often the first line of defence for those who fear they have come down with COVID-19, as well as thousands of other calls that are non-virus related.  This is a day in the life of one: New York City Paramedic Anthony Almojera.

The start of the shift: Entering 'uncharted territory'

Despite having nearly 17 years of experience under his belt, Almojera said he has never been through something like the COVID-19 pandemic. "It's uncharted territory," he said in a telephone interview last week.  EMS teams - typically made up of EMTs, paramedics and lieutenant paramedics like Almojera - respond to a variety of 911 calls, including car accidents, shootings, births, personal injuries, and cases of cardiac arrest.

A cardiac arrest call is when someone calls in to report that a person is not breathing or does not have a pulse. Almojera said those calls have gone "through the roof" due to the coronavirus, which attacks the respiratory system and makes it difficult for people to breathe. 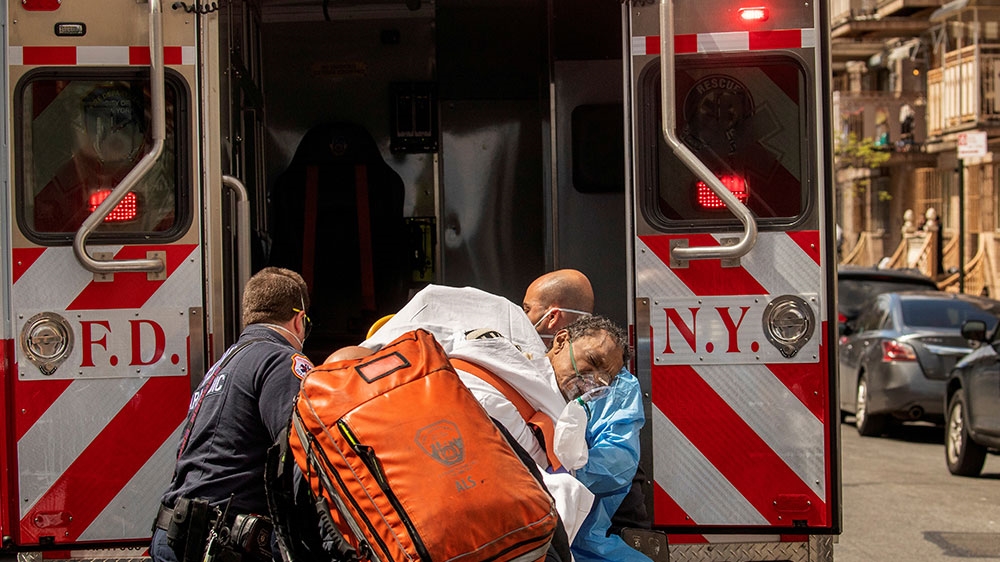 FDNY officers and EMTs move a man from a nursing home into an ambulance during the ongoing COVID-19 outbreak in Brooklyn [File: Lucas Jackson/Reuters]

More than 200 cardiac arrest calls have come in across New York City every day since March 22, he said, up from between 60 and 70 before the pandemic.

An EMS team provides care like hospital staff would, but they "bring the hospital" to where the patients are, whether in their homes, in their cars, or in the street, Almojera said.

"Last Sunday was my busiest day," he added, referring to April 12. He responded to 13 cardiac arrest calls during a 16-hour shift. "That's 13 families; I had to tell them: 'I'm sorry, there's nothing more we can do.'"

COVID-19 has made New York City's already strained and chronically under-staffed EMS system even worse, Almojera said. With many workers now also out on sick leave, 16-hour shifts have become the norm in many stations.

Those long hours are spent racing to crisis after crisis.

"The crews are coming back, and you can see it in their faces. I've had multiple members break down. I've had a lot of people text me or call me saying they have nightmares at night, that they've been drinking more. This past Saturday, I had somebody call me and tell me they thought about killing themselves," the 42-year-old said.

He recalled a recent case in which he and the other members of his EMS team entered a woman's home to find her doing CPR on her mother, who had collapsed after showing COVID-19 symptoms.

I had to go back and tell this woman: 'I'm sorry, but you lost your mom and your dad three days apart,' There's been stories like that throughout the whole city, ANTHONY ALMOJERA

When Almojera asked if anyone else was sick in the home, he said the woman told him that her father had died from the coronavirus only a few days earlier. Moments later, the woman's mother also passed away.  "I had to go back and tell this woman: 'I'm sorry, but you lost your mom and your dad three days apart,' There's been stories like that throughout the whole city," Almojera said.  He said hope is what gets EMS officers through their often gruelling workdays, but with the coronavirus death toll mounting over the past several weeks, hope has been hard to come by.

Another difficulty has been not being able to comfort grieving families as closely as they typically would because the coronavirus is so contagious and physical distancing measures are in place to contain its spread. "It doesn't allow us contact," Almojera said.  "That grief transfer doesn't take place, and so it sits with you, and you don't know what to do with it ... It's tough enough for us to deal with the daily traumas, and now you add this on top of it," he added, his voice trailing off.

The end: An emotional toll

Almojera's station in Brooklyn's Sunset Park neighbourhood counts about 50 EMS officers, he said. Thirteen of them have been quarantined at various points during the crisis, while one spent time in an intensive care unit.

EMS officers also have raised concerns that they will run out of personal protective equipment, such as N95 masks. In April, the FDNY reversed an earlier recommendation for EMS workers to only wear the medical-grade face masks when performing up-close procedures. 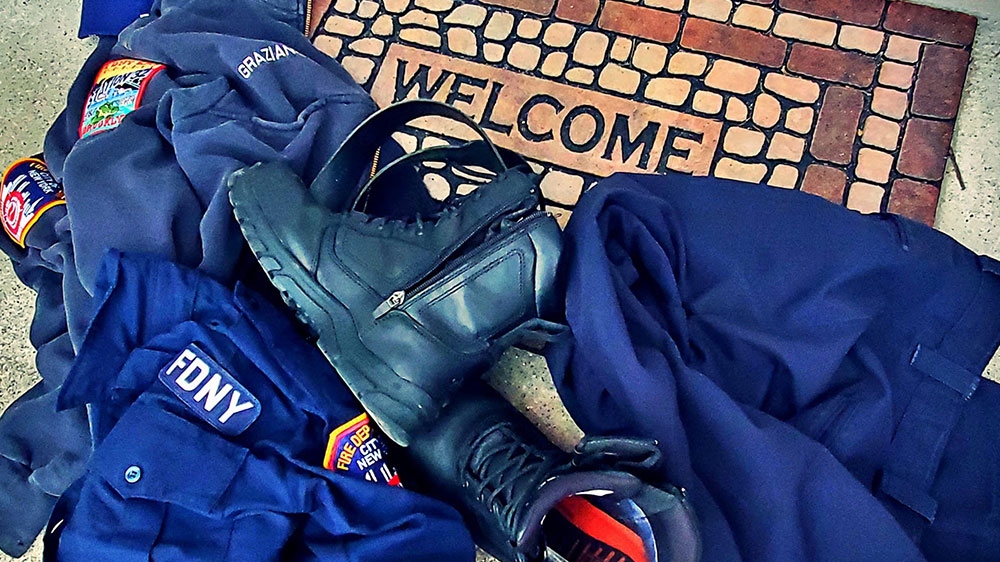 Many EMTs and paramedics fear giving the coronavirus to their families, so they take extra precautions when going home, like changing their clothes before entering their houses [Courtesy of Anthony Almojera]

That was unacceptable, said Almojera. "They would never ask a cop to go out without a bulletproof vest, but they asked us to go out without what's protecting us. So there's a lot of fear that we'll run out of this mask."

He said some of his colleagues are also worried about bringing the virus home with them, and they have taken measures to try to prevent that, such as changing into clean clothes before they go home or wearing masks and gloves when they play with their children.  "We had members sleep in their cars because they were afraid of bringing the virus home to their families." 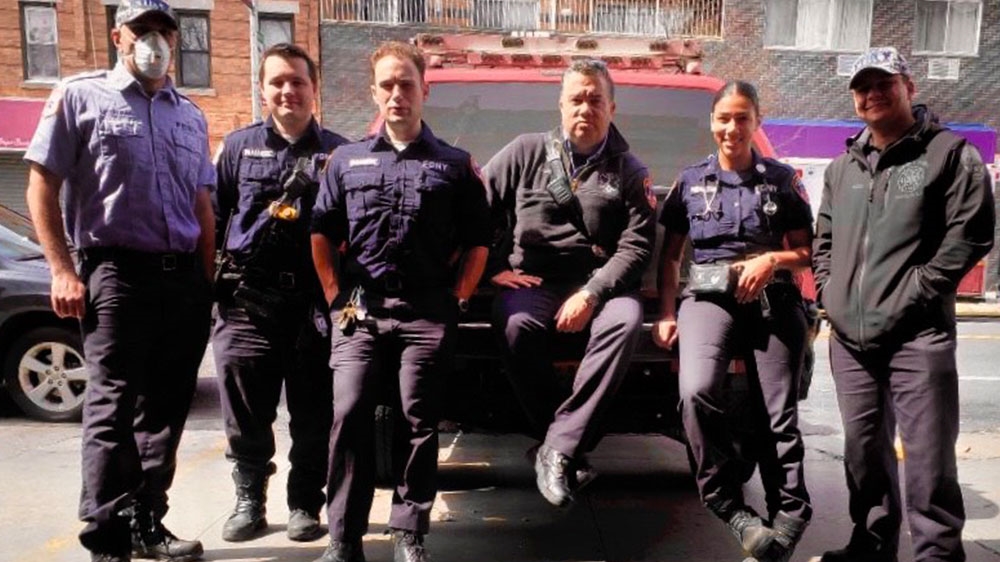 He said EMS officers need better support, including equitable wages, better working conditions and mental health resources, to withstand the COVID-19 crisis and stay in the profession for the long term.

"Imagine a couple years from now there's another one [pandemic] and all the people who went through this one, are still here because we took care of them. And then they go, 'OK let's lace up the boots; we know what to do here,'" Almojera said.

"There [are] so many essential workers ... - cops, firefighters, EMS - that don't have what they need to survive and thrive while doing their jobs," he said.

"The men and women of EMS are really doing above and beyond here, and they deserve to be taken care of."

To help support the brave men and women of the FDNY Emergency Medical Service, as they fight to save lives during the COVID 19 pandemic, click the link below:

Click Here to Donate at EMSFDNYHelpFund.com
Tweet
Behind enemy lines: At the height of New York’s co...
'You hear the cries': Virus toll haunts a New York...