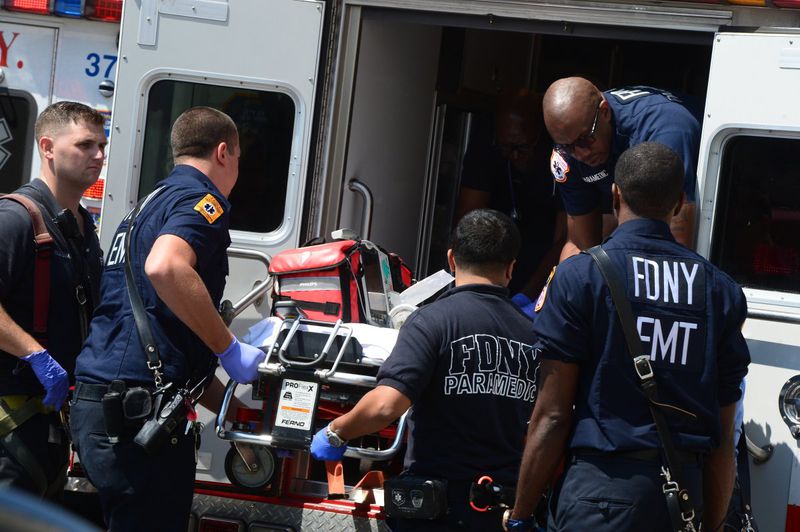 The FDNY is pulling firefighters from answering medical calls that describe symptoms associated with coronavirus, the Daily News has learned.  A department order issued Friday says 911 calls for asthma attacks, fever, coughs and difficult breathing will be handled by the Emergency Medical Service.  Fire companies with certified first responder training that would normally accompany ambulances are being told to stand down, the order said.  "Effective immediately, the following call types will temporarily not receive a [certified first responder] response," states paperwork obtained by The News.

FDNY spokesman Frank Dwyer defended the order as a move to prioritize resources amid the outbreak of the fast-spreading virus tagged COVID-19.  "Firefighters continue to respond to the highest-priority medical calls, whether they are potential COVID-19 calls or not, including Segment 1 incidents, cardiac and respiratory arrests, choking and trauma incidents," he said.  "On every call type, additional fire and EMS resources can be dispatched as needed," he said.  Segment 1 refers to top-priority calls. The Friday order referred to "Segment 2" calls.

The union repping emergency medical technicians and paramedics — which has long argued for salary parity with other city first responders — was furious at the move.  "The mayor says EMS is different, and this department order shows exactly how we stand apart," said Oren Barzilay, president of Local 2507, the union of EMTs and paramedics. "EMS is once again on the front lines as the city deals with the coronavirus outbreak. Our members will go into the hot zone of people who might be infected. That is our job and we are faced with these kinds of dangers and others every day."  "It is not the first time EMS has acted as the canary in the coal mine to protect the public, and it won't be the last. It's important now more than ever for the mayor to acknowledge the work we do," he stated.  Vincent Variale, leader of the EMS officers union, also blasted the order.  "This action demonstrates how EMS is the same as any other lifesaving, first responder agency," Variale said. "In a time of danger firefighters have been removed from EMS response, and an understaffed, undersupported EMS workforce is on the front lines protecting the people of NYC."

The city's EMS members are paid at significantly lower rates than other first responders. The salary of an FDNY EMT starts at about $35,000 and rises to $50,000 over five years. By comparison, an entry-level firefighter gets about $45,000, which more than doubles over five years.  Questioned last year about the pay gap in light of the call volume handled by EMS, Mayor de Blasio justified EMS workers' lower pay by calling their jobs "different" from those of higher-paid firefighters.  "I have deep, deep respect for our EMTs and everyone who works at EMS," de Blasio said in remarks reported by The Chief-Leader, a newspaper that serves the city's civil servants.  "I think the work is different," he said. "We are trying to make sure people are treated fairly and paid fairly, but I do think the work is different."

The pay parity push also comes as EMS members continually face new dangers on city streets.  On Monday, someone lobbed an object at a Queens ambulance crew, breaking a windshield. Also this week, a would-be assailant pulled out a knife on an EMS crew member in the Bronx. The assailant was disarmed before anyone was injured.  In still another incident, two EMTs trying to help an emotionally disturbed man inside an ambulance in the Bronx were suddenly threatened when the patient pulled out a gun. The first responders were able to get away unharmed, and the man was later taken into custody by cops.