An FDNY medic who responded to 9/11 says the coronavirus is having a 'worse' impact on first responders: 'It's traumatizing' 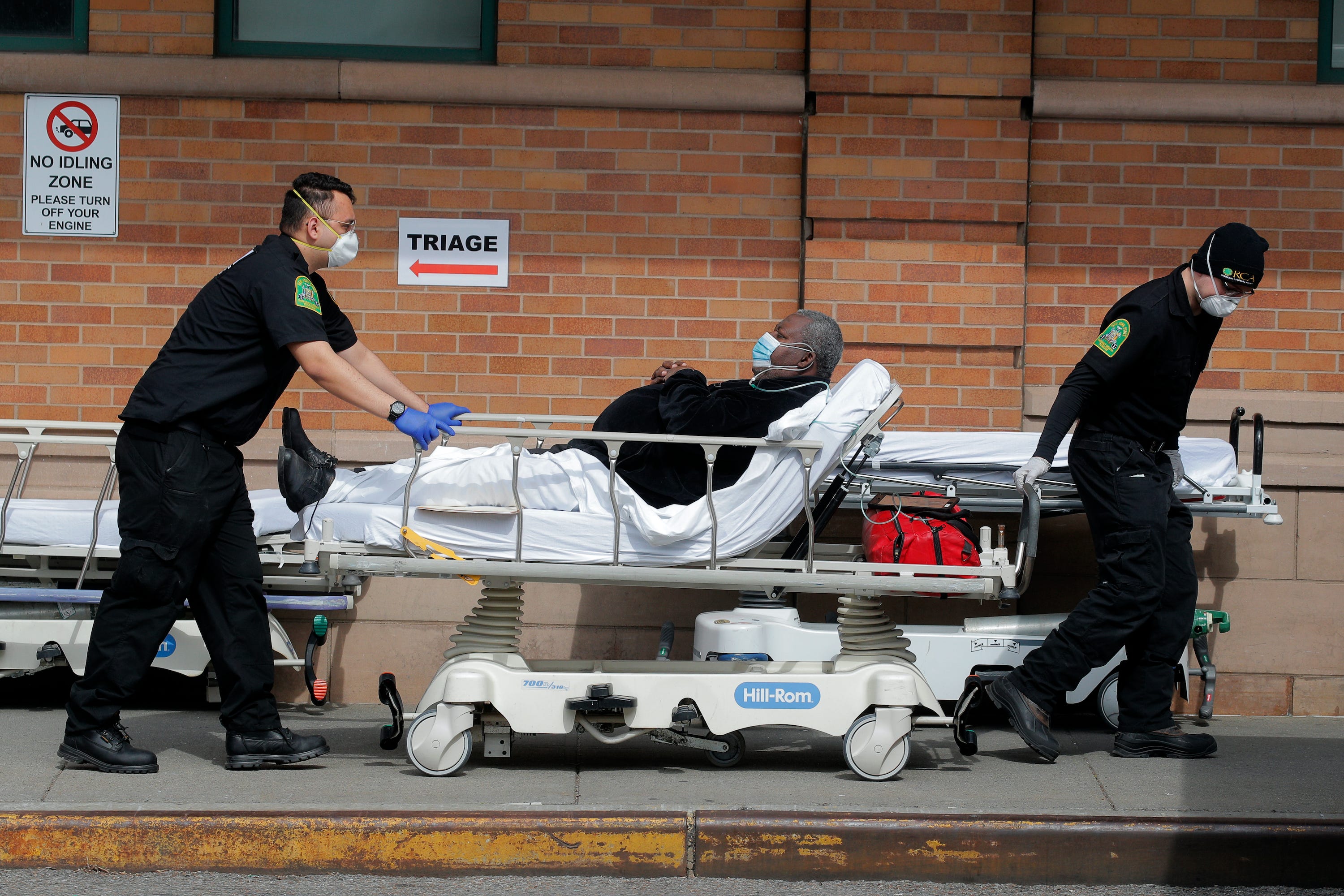 Paramedics take a patient to a Brooklyn emergency room during the coronavirus outbreak in New York on April 7, 2020. Brendan Mcdermid/Reuters

​At 9:02 a.m. on September 11, 2001, Faisel Abed watched from Ground Zero as United Airlines Flight 175 struck the South Tower of the World Trade Center.Abed, a paramedic with the New York Fire Department's Emergency Medical Services, was among thousands of first responders who rushed to the World Trade Center in the minutes after the terror attacks.

"I witnessed people jumping out of buildings," he said. "I saw the towers on their way down."

But Abed said what New York is now grappling with is far more nefarious."This, to me, is worse," he said of the coronavirus pandemic, adding, "I can guarantee you if you ask 10 first responders, they would tell you that the coronavirus is worse than the 9/11 attacks because we don't have any control — it's free wild."

Now a lieutenant and paramedic supervisor, Abed is 62 years old. Through his work, he contracted COVID-19 himself; Abed spoke to Business Insider the day after he was released from the hospital. The way he sees it, what happened on 9/11 was "man-made" — "it should've never happened, but it was an attack," Abed said. By contrast, the coronavirus is an invisible "monster" that "we can't seem to fight." Abed and at least seven other EMS workers interviewed by Business Insider said the pressure and ceaseless nature of the coronavirus response is pummeling first responders. In New York City, chronically understaffed EMS providers are responding to between 5,000 and 7,000 9-1-1 calls daily, and have been since mid-March. Their normal call volume is around 4,000. Instead of the typical 50 to 70 cardiac arrests they see per day, they're tallying more than 300.

"This is like 9/11 every single day. I've never seen this call volume in my entire life. This is like a slow-moving train crash that hasn't stopped," Vincent Variale, a lieutenant EMT and president of FDNY local 3621, told Business Insider. A lack of testing, even for first responders. First responders themselves have struggled to get tested for the coronavirus after showing symptoms. They also describe a lack of personal protective equipment (PPE) and insufficient lodging for medics and emergency medical technicians who have coronavirus symptoms or don't want to risk exposing their families.

"We're in the middle of a war," Anthony Almojera, a lieutenant paramedic and the vice president of FDNY local 3621, told Business Insider. "We're the tip of the spear here." Abed, who lives in Flushing Queens, said he first developed a cough around March 20. He told his higher-ups at Station 16 in Harlem that he wasn't feeling well. "We have this little checklist, and they want to know if you have a new fever, a new cough or body aches," Abed said. "I said yes. So they tell you to stay home, isolate yourself, and follow the protocol, which is a lot of fluids, Tylenol, you know, just take care of yourself. And I did that." About three days later, Abed developed a fever; at one point, his temperature reached 103.4 degrees. "When you get these fevers, you feel like it takes you somewhere, to a different place," he said. "It's very weird because with your fever, you get hot, you're sweating ... and, at one point, it's like you start talking to yourself ... you become delirious."

Abed did not initially get tested for the virus. He said he called the FDNY Bureau of Health Services to inquire about it, but was told that the department had neither the capability nor the supplies. "You don't have the capabilities, but yet you expect us to go out there and treat people that have this virus, and we're going to bring it home to our own family and then what?" Abed said. He decided not to seek out a drive-thru test. "I was too sick to go out for a test," he said. "I couldn't leave the house and it wasn't set up easy. The closest testing place for me was about a half-hour away. I would have to get up at 3 or 4 in the morning, get in line with 200 cars, and then maybe get lucky if I got tested, lucky if they got to me."

The FDNY has been criticized for not providing "dedicated testing" for its members, Almojera said — they have to be symptomatic and find a test themselves.

"I'm not trying to be rude or disrespectful ... but I'm on the front line," Abed said. "I have to know if I have the coronavirus because I'm going out there taking care of you and your family, and I'm going to bring this home to my family." 'It will suck the life out of you' Of the world's more than 2 million coronavirus cases, the US has more than 636,300. New York state's cases account for one-third of the US's total. More than 28,300 people have died in the US, based on data from Johns Hopkins University, and at least 11,620 of them were in New York. By comparison, the 9/11 attack killed 2,753 people at the site of the World Trade Center.

"We weren't ready for the magnitude of the pandemic," Abed said. "We simply weren't prepared. It should not have gotten this bad."

By March 29, Abed said, he was struggling to breathe. His nephew rushed him to the hospital. From the emergency room, Abed was transferred to an isolation room, where doctors performed two coronavirus swab tests. The first came back negative, possibly because they didn't go high up enough in his nasal cavity, he said. "The issue arises when they tell patients, 'Oh, you're negative,' but don't test them a second time," he said. "In the meantime, they could be positive. My second one came back positive and my chest X-ray had the COVID signature, the classic symptoms."

Patients with coronavirus can have difficulty breathing because their lungs fill with fluid. This shows up on scans as white patches of "ground glass opacity" — a well-known indicator of respiratory infection. What sets COVID-19 apart, however, is that the patches can extend to the edges of both lungs. If patients' conditions worsen and they develop acute respiratory distress syndrome, that can be fatal. Those who recover can wind up with scarred lung tissue. 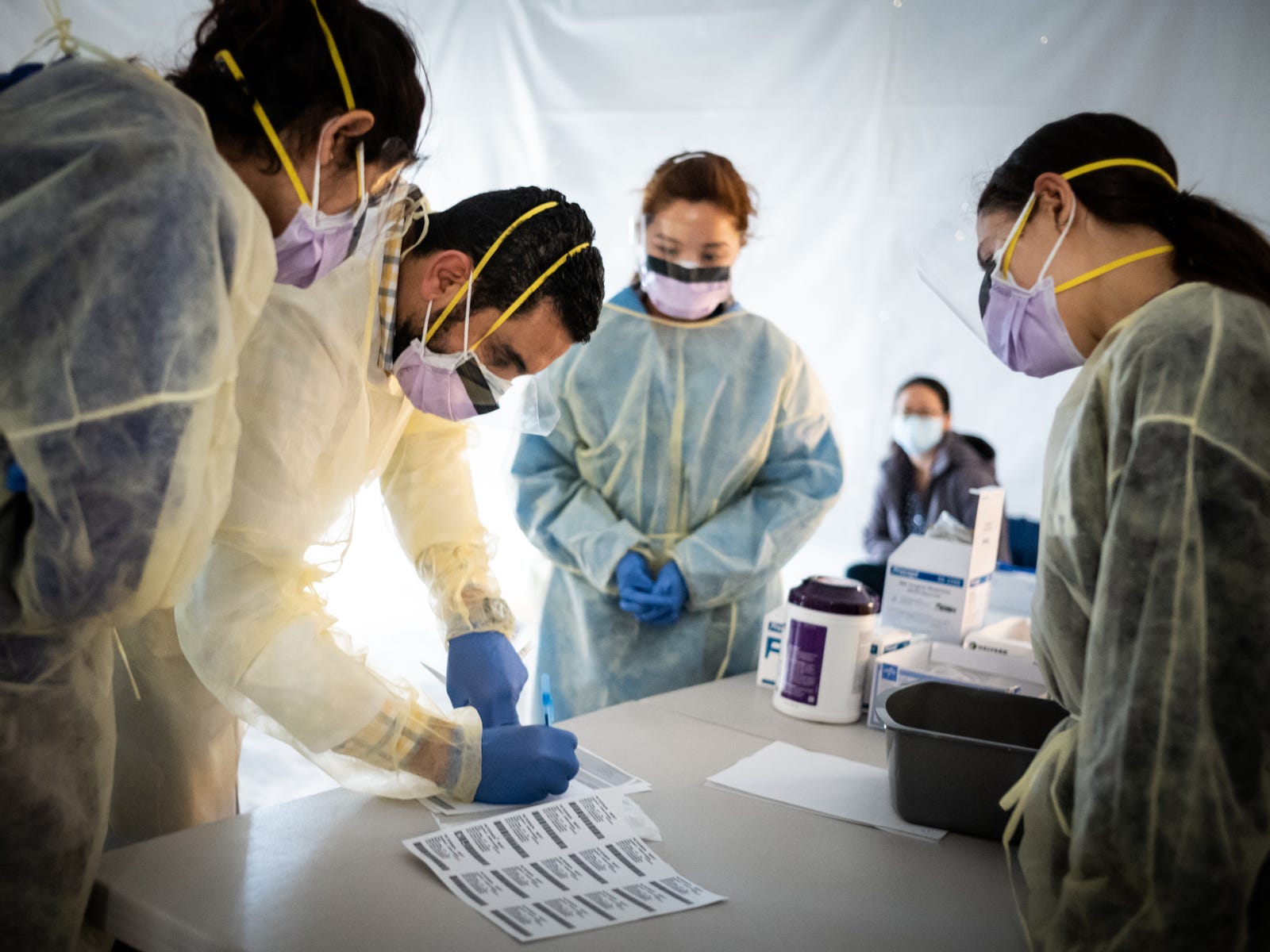 Abed's condition began to improve with a treatment regimen that included intravenous antibiotics, Tylenol, and chloroquine. He said that although he didn't have preexisting health conditions that would put him at higher risk of severe symptoms or death, he was "very, very nervous."

"Every day that went by, there was just so much uncertainty," he said. 'It does a monster job on your lungs'

Now back home, Abed is still on supplemental oxygen; he used it while speaking to Business Insider. "If I walk a little bit or talk at length, I get short of breath," he said. "It does a monster job on your lungs. It really does." Abed's sister got the coronavirus, too, but is still in the ICU, he said. The pair live on separate floors of the same house and hadn't had contact after Abed became symptomatic, but she ended up on a ventilator. Abed said his sister, who is also in her 60s, has underlying health conditions that are complicating her case. "You give this to somebody, people die," Abed said. "They go into the hospital overnight and they die. The virus is lethal. It doesn't play. It doesn't discriminate. Young, old — given the opportunity, it will suck the life out of you."

Abed is now unsure about when — or if — he will return to work. One concern is that being in the EMS requires a high level of physical activity, whether that be pushing a stretcher or doing CPR. The work requires he stay in "tip-top shape," Abed said, but the coronavirus has diminished his lung capacity. "If you call me and you say, 'Oh, I'm not feeling good,' and you're on the fifth floor, how is it going to look if I can't walk up five flights of stairs to get you?" he said. "I become short of breath, so who am I helping? I can't help you and I can't help myself, so who have we helped? Nobody."

'I wouldn't wish this on my worst enemy'

Abed has been a paramedic for 26 years and said he can't envision doing anything else. But in addition to concerns about whether he's physically strong enough to help others, there's also a "fear factor," he said.

He said he still finds himself worrying, "Am I next?... Am I going to stop breathing? Am I going to go into respiratory arrest?" "It's traumatizing," Abed added. "I wouldn't wish this on my worst enemy." Plus, he said, too little is known about immunity post recovery. Experts think most coronavirus patients who recover are immune for a period of time, but it's not clear how long antibodies last or whether all patients develop them. "I just went through this!" Abed said. "How do I know for sure that I cannot get reinfected again? I don't know. There's been no proof. Believe me, I do not want to go through this again in my life." The experience, Abed added, is forcing him to rethink his priorities. "It's making me question if it's really worth it for me to go back to work," he said. "Am I going to be protected from this? I have a family." Abed hasn't been outside or gone to work in more than three weeks, but he said he's in touch with his coworkers and knows they are overworked. He and other paramedics and EMTs might feel safer on the job, Abel said, if they got higher incomes, enough PPE, and education on how best to protect themselves during a pandemic.

"It's dangerous," he said. "They're getting pushed to the limit. It's overwhelming because there's only so much you can do." "There has to be some kind of accountability for us," he said. "We're the first ones out there ... and I would like to enjoy the rest of my life."