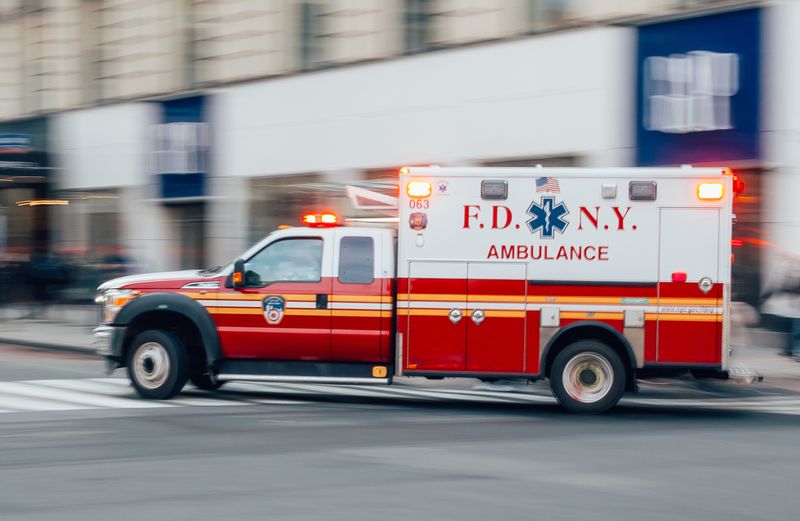 The president of the city's EMS union is bracing for hundreds of possible layoffs — and City Hall officials are warning firefighter jobs could be on the chopping block too. Mayor de Blasio is planning to send pink slips to 400 EMS personnel as part of a projected layoff of 22,000 city workers due to a deepening fiscal crisis, Oren Barzilay, president of FDNY EMS Local 2507, said Wednesday.

"Now, even with the threat of a second wave of COVID-19 looming and two recent outbreaks in Brooklyn, Bill de Blasio and his team at City Hall wants to balance the city's budget on our backs, eliminating some 400 emergency medical responder positions and placing every New Yorker's life at risk," Barzilay said. He estimates ambulances will take five to seven minutes longer to get to emergencies. "If these budget cuts are enacted, people will die needlessly," he said. "Yesterday, we were praised as heroes, essential workers saving lives. Today, the city government treats us like zeros. New Yorkers who lived through this deadly pandemic know otherwise."

The FDNY isn't planning firefighter layoffs, but some FDNY officers may get pink slips, FDNY sources said. The department plans to lower its headcount by demoting officers, lieutenants in particular, bumping them down to firefighters, sources said. That could save $20,000 a person and $150,000 in overtime, sources said. When asked for comment, an FDNY spokesperson sent a terse email reply: "We suggest you contact City Hall." City Hall officials didn't dispute Barzilay's numbers, but insisted nothing had been finalized and no layoff notices have been sent out. A City Hall spokesman floated the possibility of firefighter layoffs in a statement to the Daily News, but offered no specifics. "To be clear: City Hall does not want these layoffs to happen, but this is the hole we are in without a stimulus or borrowing authority," said de Blasio spokesman Bill Neidhardt. "Our EMTs and firefighters save lives every day and we are working with their unions to find personnel savings to avoid layoffs, but unfortunately all agencies will face layoffs."

"Without a stimulus or borrowing authority, EMTs and firefighters will have to find personnel savings," he added.

Uniformed Firefighters Association president Andrew Ansbro said as of Wednesday, he had not gotten a call from labor relations regarding firefighter layoffs. "Everyone is concerned with the financial crisis we are facing. Any layoffs or cuts would be disastrous to this city during normal operations. Add to the fact that all experts expect for coronavirus to come back," he said. "We all understand that help we received from FEMA will not come because those hundreds of ambulances crews are deployed elsewhere around the country."

De Blasio has been warning about across-the-board layoffs for weeks, and has called on President Trump and Congress to send more federal relief money. He's also asked Gov. Cuomo and the state to grant the city more borrowing power. In June, the mayor cut the city's budget by $4.7 billion, from $92.8 billion to $88.1 billion. The mayor's fiscal critics have said cuts elsewhere — such as making employees contribute to health insurance premiums or eliminating unnecessary services and leases — would reduce the number of layoffs.

Click Here to Donate at EMSFDNYHelpFund.com
Tweet
From applause to pink slips? Front-line hero weigh...
Paramedics and EMTs Under Staggering Stress in Era...